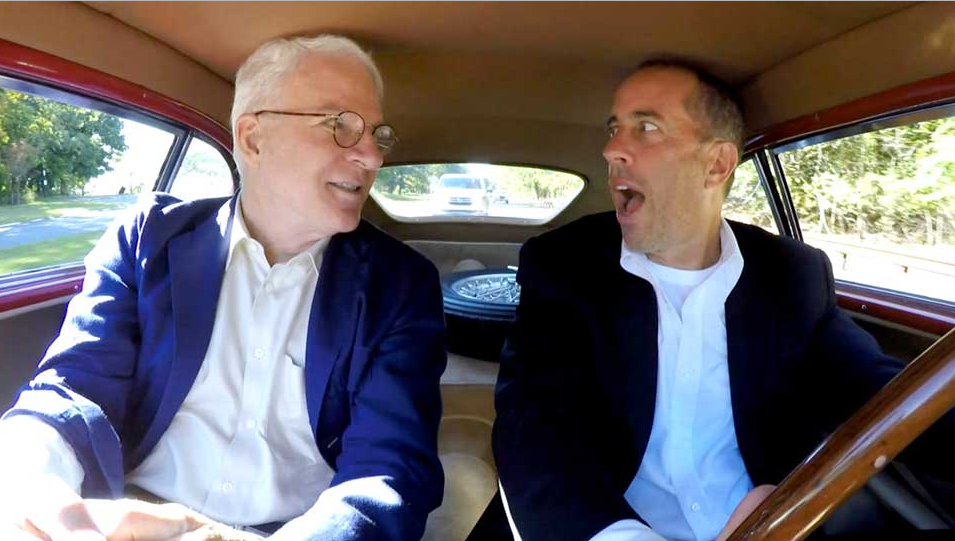 If you have a love for vintage cars AND a love for comedy, you’re in for a treat. Comedian Jerry Seinfeld’s  “Comedians in Cars Getting Coffee” is a program right up your alley! In every episode, Jerry picks up one of his comedian friends in a vintage car and they’re off for coffee or lunch. The viewer gets to be a fly on the wall and enjoy the witty banter between Jerry and his friends.

Some of the comedians who have sat shotgun in one of Jerry's cars include Sarah Silverman, David Letterman, Lewis Black, Jon Oliver, Lorne Michaels, Amy Schumer, Judd Apatow, Will Ferrell, Tina Fey, Steve Martin, and Julia Louis-Dreyfus. The series first broadcasted online in 2012.  series is now moving to Netflix.  “Comedians in Cars Getting Coffee” will be moving to Netflix later this year.

Jerry Seinfeld is a huge fan of cars. Even in old “Seinfeld” episodes, you can find evidence of his passion. On the wall, there’s a vintage Porsche poster. Look closely and you’ll spot a Skip Barber Racing School magnet on the refrigerator. Even though Jerry drives a Saab on the show, in real life, Seinfeld is a huge Porsche lover. He owns so many of them (47 to be exact) that he had to rent an entire hanger at the Santa Monica Airport house.

Seinfeld has one of the world's largest Porsche collections in the world. In his 1.4 million dollar garage you can find the following:

When you add it all up, his collection is worth over 15 million dollars! In the garage, temperatures are monitored through a high-tech HVAC unit on the roof and there is a private mechanic who keeps the cars in pristine condition.

The team at Japanese Motor Works appreciates comedy and recommend that you check out “Comedians in Cars Getting Coffee” for your vintage car and comedy fix. We appreciate humor at our auto shop! Come see for yourself! To schedule an appointment, call us at 706-549-5222. Japanese Motor Works is located at 200 Firefighter Court in Athens, GA 30607.

This is a brief description of yourself or your site, to change this text go to the admin panel, settings, plugins, and configure the plugin about.